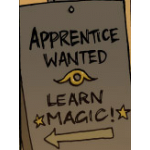 Ain't Nobody here but us chickens.

Not, like, Black Chickens, but rather the regular one. Though those haven't been seen for a decade or so.

Some tips from an old timer

Figure out your goal! Don't start expecting content not in the game, even though imagining what said content would look like is half the fun! Are you a power players that wants to finish Year 1 with THE MOST NUMBERS EVERYWHERE? Are you a roleplayer that plays based on what the character could have chosen instead of what you know to be gameplay beneficial? Are you an explorer of less developed pages here? Do you want to experience the world to its fullest and learn of hidden place and hidden knowledge? A mixture of them?

It's all possible, but not in a single gameplay. I will write from a powerplayer perspective, but give a nod to other types here and there.

Character Creation is sadly outdated (note to self: fix that), but will give you some basic info. Powerplayers should should look backgrounds that give Attribute (also outdated) points, particularly in popular skills. Do note that some skills (like Fitness) are highly related to the forbidden arts and would be advised if you're going for that. Otherwise Fitness, (potentially Finesse as well) and Strength should be kept relatively low (2 at start, with a goal to making slightly higher later on).

Money, crafting and enchanting is fairly disadvantageous to useless in this game. Buying an item (and certainly crafting one) will usually take more action for less reward than having an adventure with a good reward. Which is why becoming a "Black Sheep" is advised (and would work well with a Dark Mage character).

Retrieved from "https://academagia.fandom.com/wiki/User:Vae_Victis?oldid=31982"
Community content is available under CC-BY-SA unless otherwise noted.